As cities march across the world to mark UN anti-racism day, join them to say #NoRacismNoFascism 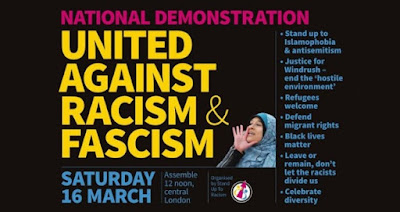 As cities march across the world to mark UN anti-racism day, join them to say #NoRacismNoFascism

Racism and fascism are on the rise.

The Trump Presidency has inspired a wave of racism and the growth of the far right around the world.

In Britain, a new far-right street movement is attempting to take advantage of the political crisis by scapegoating migrants, refugees and the Muslim community.

From Bolsanoro in Brazil and Le Pen in France, to the AfD in Germany and the FO in Austria, racists and fascists are moving off the political margins to centre stage.

A wave of Islamophobic hate crime is continuing to grow, with Muslim women at the sharp end. And there has been a major resurgence of antisemitism.

The Windrush scandal has shown the inhumanity of this government's ‘hostile environment’. Detention and deportations are destroying the lives of people that are part of the fabric of our society, and thousands of refugees remain stranded in Northern France.

The threat is huge, but together we can turn the tide. This UN anti-racism day we need the biggest, broadest international display of opposition to racism & fascism we have ever seen.

On Saturday 16th March, join us to show that the anti-racist, anti-fascist majority is on the march and we will not stop until the rise of racism & the far right has been defeated.

What is UN Anti-Racism Day?

The UN’s International Day for the Elimination of Racial Discrimination was inaugurated in 1966 to commemorate the 1960 Sharpeville massacre which saw 69 anti-apartheid protestors killed and 178 wounded for taking to the streets against the regime’s racist pass laws.
In commemorating the massacre, the UN General Assembly called on all world states and organizations to participate in a program of action to combat racism and racial discrimination.
Posted by DON'T dis US at 13:52