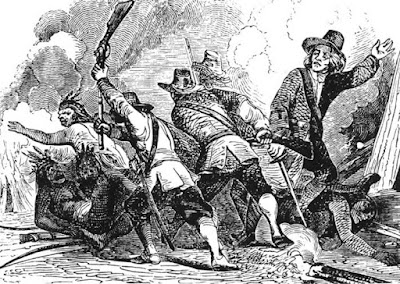 In the autumn of 1620 the ship Mayflower, with 102 passengers, landed in North America and started the colonisation of the area that became known as New England. The Mayflower had landed in a region where the Sachem of the local Wampanoag Nation was Massasoit, who subsequently helped them survive. In the autumn of 1676, following the defeat of a war of rebellion led by Massasoit’s son Metacomet (King Philip), the ship Seaflower set sail from New England with a ‘cargo’ of Indigenous American slaves bound for the English Caribbean colonies.

The creation of the New England colonies by thousands of English colonists in the seventeenth century involved the rapid decline in the indigenous population, the violent seizure of territory and slavery. However, the 400-year anniversary commemorations in the UK seem to be overlooking this.

The Mayflower journey was part of Early English Colonialism:
• The invasions of Virginia, New England and the Caribbean were accompanied by land seizure wars against the Indigenous peoples of North America
• The economic success of New England depended on trade with the slave colonies of the Caribbean, and included the trafficking of slaves
• The colonists established a pattern of ‘extravagant’ violence in the wars they conducted against Indigenous Nations that was continued for 300 years
• The establishment of a tradition of sanitizing the story of English colonialism in the Americas that has lasted 400 years.
Posted by DON'T dis US at 10:39