• Please note that this list is not exhaustive and if an event is not mentioned specifically it should not be inferred that LESE does not support it
Posted by DON'T dis US at 09:19 No comments: 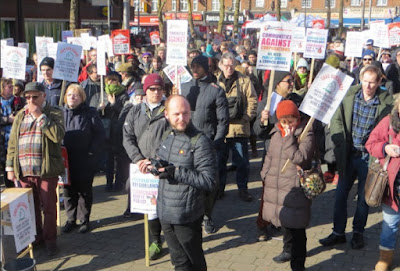 Slide-show of photos of demonstration against tower block construction in Walthamstow which will do nothing to help working class people who need somewhere to live in the borough.
http://community-languages.org.uk/waltham-forest-trades-council/?p=92

What we need (apart from the overthrow of capitalism and workers' control, of course) is more rent controlled council housing, not ghost towers for investment opportunities.

acknowledgements to Steve Cushion
All photographs copyright Mick Holder who is happy for them to be used on social media but if any commercial media wish to use them, they should contact him…
Posted by DON'T dis US at 13:19 No comments:

Postponement - 19 March:
We have just been informed that, unfortunately, George Monbiot has very unexpectedly had to postpone his visit to PNR on 19 March.
However, he is keen to set a new date - possibly in the first week of June, now - and still intends to write an article about the PNR anti-fracking protests. So… watch this space!

In addition to these dates, we are still waiting for a date for a visit by:

As announced last week, when March ends, UNITED RESISTANCE - subtitled 'Love and Defiance' - begins at PNR!!  From the beginning of April to the end of June, a variety of groups/organisations will each be 'adopting' a week and organising peaceful protests and actions, to coincide with the period when Cuadrilla think they'll begin fracking. The first week  has been adopted by the 'Women of Nanashire', and other groups, including the women of the 'Call for Calm' White Wednesdays.

So… why not book your holidays (or part of them, at least) to coincide with one of these weeks?! We're sure you won't want to miss the fun!! Apart from anything else, truck surfing conditions are likely to be extremely good this Spring! And, for those with less energy for such sports, the road in front of the gates makes a very comfortable spot for sitting down and watching these superbly athletic environmental warriors!

Finally, for those who prefer a bit of luxury (rather than tents!) at the end of the day, there's always the Premier Inn (Blackpool East) - it's only a 25-30min. walk from the fracking site's gates!

You can find out more about this via these links:

Finally, PLEASE keep me informed of any plans/developments as regards the regular White Wednesdays and Black Fridays - such as news of special appearances and/or events. I can then advertise/report these in future Updates.

In the meantime, you can always catch up with developments via Tina Rothery's Blog:

All the best
Allan Todd
Membership Secretary
Allerdale & Copeland Green Party
Posted by DON'T dis US at 08:06 No comments:

Who cares about care?

Who cares about care?
Date Mon 9 Apr 2018 - 10:00 to 15:30
Location Congress house, 23-28 Great Russell Street, WC1B 3LS London
Contact lese@tuc.org.uk
Cost Free
Overview
London, East & South East (LESE) Pensioners’ Network Annual Seminar
Every week we hear about failures in the care services: neglect and ill treatment in residential homes, limited care times and poor service in users' own homes. This is aggravated by the bad working conditions and low pay of carers.
In 2016 LESE asked what can be done to support and improve conditions both for service users and service providers. This Seminar is a follow on and will outline the problems of the system, point to new ways forward and give participants the opportunity to express their own views.
For more information, call 020 7467 1220
Speakers

Tomorrow over 40,000 lecturers, researchers, administrators and librarians in UCU are set to begin a wave of strikes

16 Colleges and 61 Universities on strike 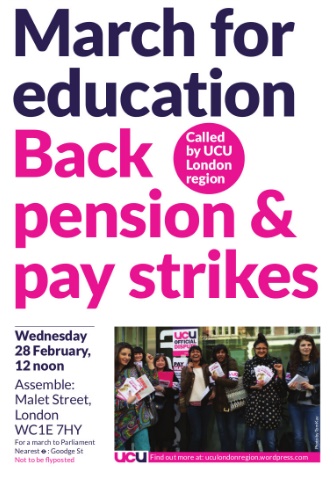 HDV going to Court of Appeal.

HDV going to Court of Appeal.

Grateful for any promotion of second round of crowdfunding, for HDV going to Court of Appeal.

We are challenging on all four grounds and the judge has left that open as in one case he says that the outcome may well have been different if Haringey had consulted on HDV which it was admitted they did not.
The judgement rests in good part on our being ‘’out of time’’ but there is a very strong case that we could not challenge the decision until it was in fact set up in July 2017.
And it will matter for Councils, and local democracy across the country, if we can get a ruling against the way in which Cabinet was used to determine assets transfer and strategic decisions, exclusive of the Council, and wider public.

The political battle has now been won locally, and is reverberating more widely. But the HDV is only halted, not stopped altogether.

The renewed crowdfunder — for the £7k more for Appeal - needs some punters again. 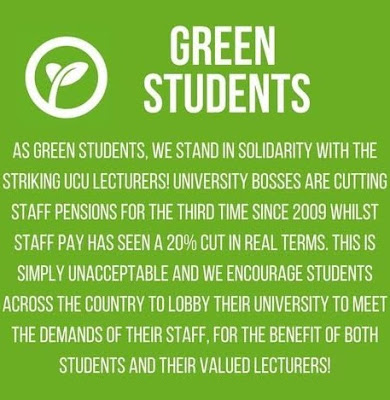 ·       GS website temporarily down, blog still up at greenseniors.blogspot.com/

Will you join me this Saturday to defend our NHS? & NHS Protests outside London on February 3rd.

My dad was a doctor in the NHS all his working life. My son is disabled and relies on the NHS for his wellbeing. I know how precious our health service is.
Will you join me this Saturday to defend our NHS?
I’ll be addressing tens of thousands of people this Saturday, all coming together defend our NHS against this Government’s savage attacks and cuts.
Make no mistake. It’s not the disabled who are responsible for our NHS crisis. It’s not the elderly. It’s not immigrants. It’s not the tireless doctors and nurses and staff.
Our Government has caused this crisis.
This is just one reason we need to fight for a vote on the final Brexit deal. We have to protect freedom of movement to keep our NHS on its feet. And we can’t fight austerity while we’re punished by a hard Brexit, overseen by a Government which wants to marketise our healthcare.
This Saturday, I’ll be calling on all parties to support a vote on the final Brexit deal - so we can revive, reinstate, and restore our NHS.
Join me to defend our NHS.
See you on the streets,
Jonathan Bartley

Co-leader of the Green Party of England and Wales.

Co-leader of the Green Party of England and Wales.