The Neglected History of the Diverse Victims of Nazism
Merilyn Moos

Seminar Room N304, Third Floor, Institute of Historical Research , Senate House, Malet Street, London WC1E 7HU
more details...
Other London Socialist Historians Group seminars:
The next meeting of the Socialist History Society will take place on 21st October at 2pm
at the Marx Memorial Library.
1917 - The Russian Revolution, Reactions and Impact
It will be the launch of a new SHS occasional publication on the Russian Revolution.

Arguing around Toussaint': The Black Jacobin in an Age of Revolutions

October 4th, 2017 17:30
UCL Institute of the Americas, 51 Gordon Square Attendance to this event is free of charge, but registration is required.
Posted by DON'T dis US at 21:10 No comments:

Congress notes the irrefutable evidence that dangerous climate change is driving unprecedented changes to our environment such as the devastating flooding witnessed in the UK in 2004. Congress further notes the risk to meeting the challenge of climate change with the announcement of Donald Trump to withdraw the US from the Paris Climate Agreement.

Congress welcomes the report by the Transnational Institute Reclaiming Public Service: how cities and citizens are turning back privatization, which details the global trend to remunicipalise public services, including energy, and supports efforts by unions internationally to raise issues such as public ownership and democratic control as part of solutions to climate change.

Congress notes that transport is responsible for a quarter of the UK’s greenhouse gas emissions and believes that a reduction in carbon dioxide levels must be the basis of the UK’s future transport policy in addition to building public transport capacity and moving more freight from road to rail.

Congress believes that to effectively combat climate change and move towards a low carbon economy we cannot leave this to the markets and therefore need a strong role for the public sector in driving the measures needed to undertake this transition.

Congress notes that pension schemes invest billions of pounds into fossil fuel corporations. To this end, Congress calls on the TUC to:
i.                     work with the Labour Party and others that advocate for an end to the UK’s rigged energy system to bring it back into public ownership and democratic control
ii.                   . advocate for a mass programme of retrofit and insulation of Britain’s homes and public buildings
iii.                  . lobby to demand rights for workplace environmental reps iv. lobby for the establishment of a Just Transition strategy for those workers affected by the industrial changes necessary to develop a more environmentally sustainable future for all, and develop practical steps needed to achieve this as integral to industrial strategy v. consult with all affiliates to seek input into the development of a cross sector industrial strategy that works towards delivering internationally agreed carbon emission reduction targets
iv.                 . investigate the long-term risks for pension funds investing in fossil fuels, promote divestment, and alternative reinvestment in the sustainable economy.

Grunwick 40 : The mural is finally ready!

A New Lucas Plan: An Idea Whose Time Has Come? 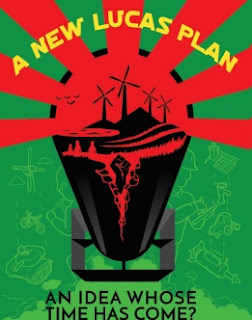 A New Lucas Plan: An Idea Whose Time Has Come?

In the 1970s, workers at Lucas Aerospace showed how livelihoods under threat could be saved by converting production from arms to socially useful products, such as wind turbines, hybrid car engines and medical equipment. 40 years later, militarism, environmental and economic crises make the Lucas workers’ inspiring ideas, and their approach of bottom-up planning even more necessary. Come and discuss the idea of a new Lucas Plan with one of the original Lucas Aerospace shop
stewards and other leading trade unionists at our TUC fringe meeting.

Chaired by Romayne Phoenix of the New Lucas Plan group

Free. To get to Yates Brighton pub, leave the Brighton Centre, turn left and left again on West Street, pub is 150 yards on the right side.

For more information, visit lucasplan.org.uk, or email info@breakingtheframe.org.uk.
Posted by DON'T dis US at 16:05 No comments: