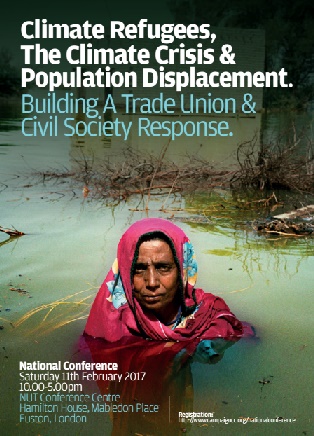 Climate change is devastating peoples’ lives and livelihoods and whole economies, and is a growing concern to trade unions for whom effective responses are now a fundamental issue of justice - economic, employment and income security. Yet people displaced from their homes have no legal status in international law, and are vilified as 'economic migrants'. The overwhelming majority are given safe haven by other poor countries, whilst in the West, racism and xenophobia are leading to demands for more walls and fences.

‘Climate Refugees’ - The Climate Crisis and Population Displacement: Building a Trade Union and Civil Society Response is supported by trade unions and environmental, refugee and human rights campaigns. It will include expert briefings, and new evidence of the impact of climate change on human security. We aim to dispel myths about refugees, debate the need for the need for a global response based on justice and solidarity including the need for legal protection for those being displaced by the climate crisis, and discuss how we can build a powerful movement that can demand stronger government leadership on this fundamental issue.

PEOPLE'S QUESTION TIME - BREXIT: WHAT ARE OUR DEMANDS?

PEOPLE'S QUESTION TIME - BREXIT: WHAT ARE OUR DEMANDS?

see the livestream at https://www.facebook.com/ThePeoplesAssembly/

a stand against all Trump stands for - racism, misogyny, corporate cronyism and fossil-fuelled climate change denial

As the world enters a new era with the inauguration of President Trump, join others in your area to make a stand against all Trump stands for - racism, misogyny, corporate cronyism and fossil-fuelled climate change denial that puts our whole planet at risk.
There will be rallies and banner drops from bridges ('Bridges Not Walls') in at least 23 cities across the UK, with others in smaller towns. Events we know about so far are listed on our website. It's not too late to organise one yourself, either. As climate activists it's vital that we are there with a clear message, standing in solidarity with anti-racism and women's rights campaigners. Let's help build and promote these protests so they are heard within our own country as well!
In London we'll be joining the rally outside the US embassy with a climate bloc. (Facebook event)
Stay in touch and let us know what's going on.
All the best
Claire and everyone at CCC
To fight for climate action we rely on support from our members - please sign up here to give a small monthly amount or one-off donation.
Find out more at www.campaigncc.org.
Follow us on Facebook and Twitter
This email was sent by:
Campaign against Climate Change
This email was sent to:
yrrumuk@googlemail.com  change email or list subscriptions. Opt out from emails from the Campaign against Climate Change
Posted by DON'T dis US at 01:41 No comments:

The NHS crisis has reached a new level. 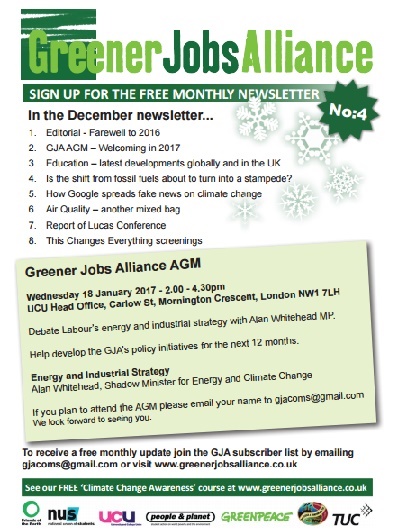 The People's Assembly is also pleased to announce the first of many community Screenings of Ken Loach's powerful, must-see inditement of Britains benefits system, 'I, Daniel Blake'. Get along to a screening near you or organise a showing yourself.

For more info about the screenings and to book your place, click here.
Coming up (dates tbc) in, Bristol, Oxford, Swindon, Milton Keynes, North London, Brighton and multiple locations across Scotland and Northern Ireland. If you want to find out more information about a screening or you want to set up your own, please contact, office@thepeoplesassemblu.org.uk


People's Question Time: Brexit - What are our demands?

We will be touring the country with a series of Question Time events around Brexit. This tour will be launched in London on Thursday 19 January. In increasing uncertainty about what Brexit will mean for us, we will be developing a series of key demands to put to the Government so that Brexit is negotiated in the interests of the majority and not the bankers and bosses.
If you're in London please come along, if not, you will be able to watch it live on our Facebook page. We will be announcing a series of new dates early in the new year.

It's Our NHS - National Demonstration 4 March

The People's Assembly has joined forces with Health Campaigns Together to organise a major national demonstration in defence of our NHS.

Click here for more info
SATURDAY 4 MARCH, 12pm TAVISTOCK SQUARE
Check out the facebook event and get inviting and sharing. Use the hashtag #ournhs


Don't for forget if you can afford to help in any way please donate what you can:

Unite the Union General Secretary Elections
We want to also give a special mention to an important election coming up in the UK's biggest trade union UNITE. Len McCluskey who has been UNITE's General Secretary since 2011 has triggered an early election which will take place in early 2017.
UNITE has been central to the anti-austerity movement and one of the founding members of the People's Assembly. Without the national support of UNITE it would have been impossible to build the broad coalition against austerity we have today. It's for this reason that the right wing media and establishment will throw their weight behind trying to undermine the work that Len and UNITE have done. They will do all they can to make sure the right take hold of one of the most influential trade unions we have.
If you are a member please make sure you vote. You can also become a member and vote as long as you join before 1 January. If you are unemployed, or unable to join a workplace union, UNITE have a special community membership. Details here
Solidarity!
The People's Assembly Against Austerity
http://www.thepeoplesassembly.org.uk/
Posted by DON'T dis US at 01:06 No comments: