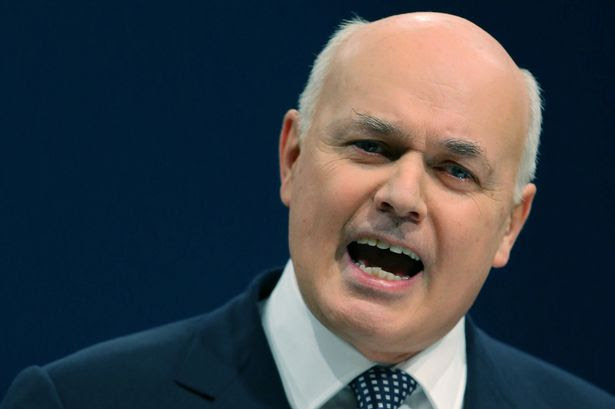 War on the old: IDS plans to batter OAPs with cuts
PA
Iain Duncan Smith tonight stepped up the Tory war on the poor by turning his sights on society’s most vulnerable.
The penny-pinching Work and Pensions Secretary wants to slash winter fuel allowances for pensioners and scrap their free bus passes and TV licences in a move that would spell misery for millions of people.
His cruel cuts could mean OAPs having to choose between heating their homes or eating as they lose up to £300 in cold weather payments.
And the over-75s would also have to fork out £145 for TV licences.
Mr Duncan Smith’s move finally destroyed any claim the party had to being caring Conservatives.
And it flies in the face of David Cameron’s election pledge to rule out cuts to pensioner ­benefits.
Mr Duncan Smith, whose flagship Universal Credit policy is in chaos, said the Government was discussing whether to put OAP payments into a wider Whitehall cap on welfare spending.
He revealed today: “We need maximum flexibility with the cap. Pretty much all existing ringfences will have to disappear.”
Shadow Chief ­Secretary to the Treasury Chris Leslie said: “There are clearly major divisions within the Government over whether to cap pensioner benefits.
“One minute Downing Street are ruling it out and the next Iain Duncan Smith is ruling it in. It is time for the Government to come clean over what exactly they are going to do with pensioner benefits.”
Mr Duncan Smith’s move will also pile pressure on Mr Cameron to again rule out cuts to pensioner welfare.
The proposed spending cap was announced by George Osborne last year and will be formally set in the Budget later this year. At that time, the Chancellor will also set out which benefits will be included in it.
It will include most welfare payments – including housing benefit, tax credits and income support, Treasury sources said last night. But it will not include pensions or Job Seekers’ Allowance.
Under Mr Osborne’s proposal, the Government would be forced to cut benefits or ask Parliament for more cash if it breached its annual cap on welfare spending.
Putting OAP benefits in the cap will raise the prospect that they will have to be means tested in the long term as the number of pensioners grows year on year – putting pressure on welfare spending.
Treasury sources last night played down this prospect – pointing out that the annual spend on pensioner benefits was dwarfed by other payments.
But speaking at the Commons’ Work and Pensions Select Committee today, Mr Duncan Smith suggested too many benefits had already been guaranteed by ministers.
The PM has excluded old age pensions to shore up support among elderly voters who turn out in droves at elections.
But OAP benefits – including winter fuel payments, free TV licences and bus passes – have not yet been given the same protection.
Mr Duncan Smith was asked if scrapping those ring fences meant pensioner benefits were going to be put in the cap. He replied: “These are matters that are still under discussion.”
A Treasury source said: “It doesn’t necessarily mean pensioner benefits are facing cuts. It means in order to maintain them other benefits would have to be cut in order to keep overall spending below the cap.”
Labour has previously revealed plans to strip wealthy pensioners of their winter fuel payments but have ruled out interfering with free TV licences for OAPs.
The Coalition budget will set out the cap annually for five years from 2015. Announcing the policy, Mr Osborne said that he was introducing a “limit to the nation’s credit card”.
He said: “We’ve already capped the benefits of individuals, now we cap the system as a whole.”
Ministers have already ­introduced a £26,000 cap on the total ­families can claim in benefits, the same level as the average wage, which is being rolled out across the country.
The Mirror tonight asked aides of Mr Duncan Smith whether he wanted to see pensioner benefits reduced.
A source said: “It is something that needs to be looked at and it is still under discussion.”