1.  Apologies: Malcolm Bailey
2.  Minutes Green Seniors’ meeting:  Friday 6/4/2018 matters arising
a) Agreed for accuracy
b) Nominations still open for post of G.S Treasurer.
c) GPEW Conference: ideas invited for a fringe at next GP conference, the idea of a joint meeting with GPTU on Digital exclusion still a possibility. Noted that Young Greens had hosted 4 meetings at conference compared to Green Seniors’ one (although this was in part due to email problems related to submitting fringe applications).
d) Problems continue with GS website, Maureen Childs has been trying unsuccessfully to contact GPEW head office re them hosting the site and posting a link to it on the GPEW site. blog still up at greenseniors.blogspot.com/.
e)  Maureen Childs has completed research at Toynbee Hall, findings to be presented.

3 Regional/local gs groups. Maureen Childs had replied to Martin Collins welcoming his proposal to set up an "Old Greens North" group for Green Seniors living in the North of England (North of the Humber-Mersey line). It was agreed that this would be a welcomed development and members interested should contact Martin via sandmartyn@phonecoop.coop me if interested. The meeting reiterated that it welcomed other Green Seniors’ groups being set up in other regions.

•t Building a movement
How should we encourage and support more people to contribute to achieving the Green Party’s aims? This includes ensuring that we are welcoming and inclusive; making active membership of the Green Party something that appeals to people who share our values; and supporting those who are already active to contribute effectively.
There is too much reliance on paid head office staff who may have developed an office culture that looks down on and tends to exclude Green Party activists. A lack of consultation with members leads to members not identifying with the party nationally. Green Seniors’ feel that older members particularly suffer from this and that their experience and knowledge tend to be ignored, leading to a lack of organisational memory.
The Green Party needs to publicly campaign more between elections, supporting single issue campaigns (eg around digital exclusion affecting older people, disabled people and those not fluent in English). This campaigning needs to aim for maximum media visibility and press coverage and needs the support of proper funding and resourcing for campaigns from the Party regionally and nationally.
Better communication with interest and working groups within the party, such as Green Seniors is needed. The fact that the Chair of Green Seniors has recently been trying unsuccessfully to contact GPEW head office re them hosting the site and posting a link to it on the GPEW site, is an illustration of this.
• How should we take decisions in the Green Party to balance our desire to give everyone a say with the need to make decisions in a timely and effective manner? This includes recognising and respecting expertise of different kinds; calling each other to account; ensuring that decisions match our values; and having the right processes
in place for different types of decisions. What have you seen work well in other organisations?

Although perhaps not always as democratic as many would like, the Green Party is far more democratic than most other British political parties, this one of its great strengths and something that attracts people to it. Its decision making needs to be as democratic as possible. GPEX, the Party leadership and paid office staff need to follow conference decisions, and there should be less decision making by paid head office staff. The party should not attempt to adopt business style means of decision making and always remember that it is a democratic organisation. Sometimes the use of pseudo business language and big words alienated members.
• Effectiveness What can we do to make more of a difference with the people and resources we already have? This includes ensuring that what we’ve learned in one local party is picked up by others; making good use of people’s skills and time; and helping our people to avoid burn-out.
The Party should make more use of volunteers. The role of regional bodies (eg the London Federation), should be enhanced, since members often have a better grasp of local issues and the realities of campaigning in their own areas. Perhaps particularly in the case of London media training is important.
• Working Together What is the best way to balance the allowing local parties to make their own decisions with the benefits of working together? This includes developing plans and strategies; feeding into decisions that affect us all; and reaching out to other groups and movements that share some of our aims and values.
Some of our answers have already been given above, but we would like to add that the Party website should be used as a collective resource to collate and draw on experience and expertise, (eg: policies, local campaigns, local media coverage, statements on specific issues, etc). The website was used in this way when Spencer FitzGibbon was Media Co-ordinator.
• The Future of the Party
If you could make one change to the Green Party of England Wales, what would it be?
A greater percentage of membership fees should be allocated to local and regional parties/federations.
If you could keep one thing about the way the party works now, what would that be?
As stated above, the party’s strong point is its internal democracy, this needs to be defended and enhanced
Anything Else
If you have other suggestions, please share them here.
In London training/induction of new members has been much appreciated.

4    Local elections: Maureen Childs stood in Tower Hamlets, Noel Lynch in East Finchley, Peter Murry in Willesden Green, but the Willesden Green election was postponed until June 21st due to the demise of a Labour candidate. 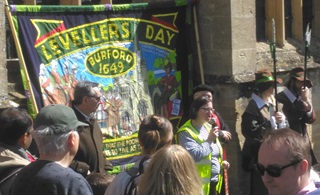 2pm Saturday 19 May
In the Churchyard, St John the Baptist Church, Church Green, Burford OX18 4RY
There will be a short commemoration to Levellers Cornet James Thompson, Corporal Perkins, and John Church, who were executed in the churchyard, 17 May 1649. The commemoration will be led by the Reverend Giles Fraser. Flowers will be laid. The ‘Sea Green Singers’ will perform. Trade union banners are welcome.

3pm Saturday 19 May
In the ‘Old Hall’, in Warwick Hall, adjacent to the church, Church Green, Burford OX18 4RY
There will a conversation between the Reverend Giles Fraser and John Rees about ‘religion and the English revolution’, followed by and discussion with the audience. Reverend Giles Fraser was formerly the Team Rector at St Mary the Virgin, Putney, which was the location of the ‘Putney Debates’, in 1647. He is currently the priest-in-charge at St Mary's, Newington, near the Elephant and Castle, south London, and he writes a weekly Friday column for The Guardian. John Rees wrote ‘The Leveller Revolution: Radical Political Organisation in England, 1640-1650’, which was published in 2016 and received excellent reviews.