Green Seniors supports the current postal strikes because they are not just in defence of workers' pay, conditions and pensions, the strikes are against Post Office privatisation and closure plans..

Communication Workers Union General Secretary Dave Ward said: “Our members are being forced into fighting to save their jobs and this great institution from terminal decline.”
“We didn’t want to be in this position, but unless we stand up now, the Post Office as we know it will cease to exist. We are defending the very future of the Post Office in this country.
“We want a Post Office that works for everyone, for communities, for small and medium-sized businesses, and for the people who serve them – our hard working members, but the people running the Post Office have no serious plan other than further closures and managed decline and we won’t accept that.” (http://www.cwu.org/media/news/2016/december/12/post-office-bosses-provoke-christmas-week-strike/)
Green Seniors supports the CWU strike because Post Offices are very important to seniors and disabled people, fewer post offices means less access to services and social contact for seniors. The union is right when it says that it is defending a cherished public service

TRANSPORT FOR LONDON (TFL) ATTACKS ITS OWN PENSIONERS

Subject: "TRANSPORT FOR LONDON (TFL) ATTACKS ITS OWN PENSIONERS"

On my own responsibility, I am now pursuing this through TSSA. I also wish to make NPC aware of what TfL is doing. Additionally, through Ron's chairing of the SERTUC Pensioners Network, I would like this raised at the next Network meeting. This email was sent today to TSSA following the appalling outcome of the TfL Pensioners Forum meeting held on Thursday 17 November: As an elected delegate to the TfL Pensioners Consultative Council and Pensioners Forum, I was yesterday subjected to the disgusting spectacle of TfL unilaterally ending three key aspects for its 32,000 pensioners.

These were not pension entitlements but additional facilities which TfL, and before that LRT/LT, pensioners have enjoyed. The saving from these withdrawals is around £120,000 a year, which is 0.005% of the £2.9 billion the organisation is seeking to cut from its expenditure. The three things funded by TfL which have been unilaterally withdrawn (two were subjected to a 'consultation' pressured by time and as expected, our responses were ignored) are...

The annual calendar to all pensioners, which also contains the contact details every pensioner needs, on good quality paper which will last for a year (unilaterally withdrawn by the Commissioner, no consultation). Annual cost around £25,000.

The 'replacement' contact list will be in an existing quarterly pensioner magazine, which is on low-quality paper and has no durability, even assuming pensioners see the information and remember to retain it;

The small hamper, which is an age-related qualification and only goes to oldest pensioners, and the surviving partners of the eldest, the latter only every five years. Annual cost £28,000;

and The Pensioner Liaison Representative (PLR) Scheme - this is a voluntary arrangement whereby other TfL pensioners who are still active and mobile maintain links with older TfL pensioners in a region close to the activist's address. TfL's argument in this case is that less than 15% of pensioners are reached. Even so, over 3000 isolated and often infirm pensioners have a link via PLRs to former colleagues and people who understand their needs. Replacements for PLRs are suggested (by management, who are all in the workplace and do not have any understanding of specialised needs of older people) as Age UK and "other services in the voluntary sector". Our PLRs are free to TfL pensioners, but management do not care that Age UK for example charges £16.50 an hour, just to make an assessment.

TfL's savings are spread across the entire organisation but while each department and office make sacrifices by consultation (...), pensioners who have no effective voice and whose utility to TfL has ended, are now seen as only a liability, have been hit for everything, to save a sum which will not make any appreciable difference to the overall savings. The Pensioners Forum did as request, and consulted colleagues. We offered cut-back alternatives for hampers, and ways to make the PLR Scheme more cost-effective. Our submissions were flatly ignored. We had already been presented with a non-negotiable fait accompli on the calendar, which we believe is also sent to people other than pensioners, and we are being asked to bear that cost too.

I am therefore asking my union, of which I have been a full subscribing member since July 1986 (with one intervening three-month free membership period in year 2000!) and an activist for all this century, on the EC, my branches and Division, on the Standing Orders Committee, and now in the Retired Members' Group, to take up this blatant unfairness and bullying of a cadre of former employees who cannot fight back in any directly meaningful way.

Pensioners are still people, many are still TSSA members. Our pensions are deferred wages - we paid for them. Many pensioners gave loyal service and many also served 'London Transport' in World War 2. This is not a decent, human way to repay that.

My colleagues in RMT and ASLEF should be making similar approaches to their unions. We (TSSA) supported Sadiq Khan to become Mayor of London, and I'm asking you to directly ask him the following questions:

1. What exactly were Sadiq's or his representatives' instructions to TfL in general and to Mike Brown as to the making of savings?
2. Did the Mayor or his representatives ever use the term 'non-operational spend' or anything similar or which could be taken to mean that, in terms of the savings sought from TfL?
3. Is the Mayor content that pensioners are being forced to pay for these savings?
4. Does the Mayor really believe that removing around £120,000 from the annual TfL budget will in any meaningful way help reach the £2.9 billion saving?

If the Mayor demurs from answering these questions, please advise me, and use your best endeavours to seek responses via the London Labour Party and the Greater London Assembly.
Please ask these questions as a matter of urgency and send the responses to me as soon as you can. This is a quality of life issue for 32,000 pensioners. Even the management who impose this will one day be pensioners too - how will they feel when, even with their large pensions, one day they have something of value taken away from them?

Please do not divert this into the 'pending' file. 32,000 pensioners are now depending on people like us to show that Society is not a figment of the late Thatcher's imagination. 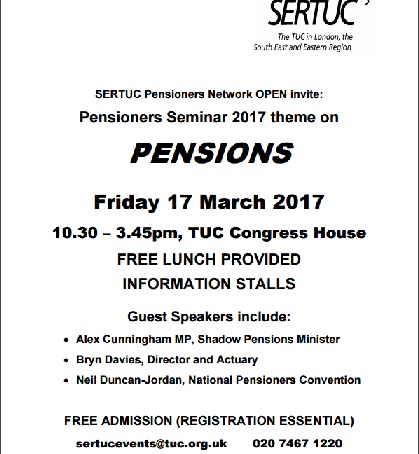